The City of Lancaster is in the beginning stages of redeveloping vacant and underutilized properties located inside its designated Community Revitalization Improvement Zone (CRIZ). Element Environmental Solutions (E2S) was privileged to take part in this exciting endeavor. The CRIZ is a new program in Pennsylvania created to spark redevelopment and revitalization in economically distressed areas by allowing a municipality to use state and local taxes to help finance construction and redevelopment in a CRIZ zone. Lancaster’s CRIZ is comprised of one-hundred thirty noncontiguous acres of vacant or underutilized properties. E2S partnered with Heck Construction to conduct a hazardous material survey prior to demolition and renovation activities of a former tobacco warehouse slated to become an apartment complex. Our primary objective was to identify and quantify any asbestos containing material (ACM) or other hazardous materials that were a concern due to the age of the building. 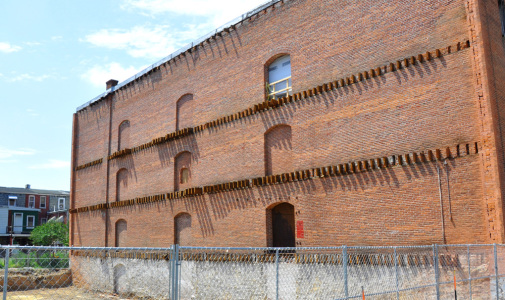 Historic warehouse undergoing renovations to be developed into a mixed use residential complex.

The David H. Miller Tobacco Warehouse, a three-story brick building was built in 1900 with fifty-four bays used for tobacco storage. The cigar leaf tobacco industry played an important role in Lancaster’s economy in the late 1800s through the mid-1900s. There are at least nineteen former tobacco warehouses located in the City of Lancaster that are on the National Register of Historic Places. Included among these is 512 North Market Street, which has been vacant for several years. Located minutes away from the Clippers Stadium and other downtown hotspots. This site is being redeveloped by Oak Tree Development into a mixed-use residential and commercial property. The northern half of the property will consist of an 18-unit apartment complex while the southern half will be used for commercial purposes. The southern half has been demolished with the remaining construction beginning this August.

In the Commonwealth of Pennsylvania, a developer or contractor must notify the Department of Environmental Protection (PaDEP) at least ten working days prior to the start of the project if asbestos containing materials (ACM) are identified. A regulated facility must notify the Department ten days prior to demolition whether asbestos is present or not. A regulated facility is any institutional, commercial, public or industrial structure. This definition also includes residential buildings comprised of five or more dwelling units under the National Emission Standards for Hazardous Air Pollutants (NESHAP) program.

Despite the building’s age, E2S did not identify any asbestos containing materials in the six bay by nine bay, three-story tobacco warehouse. E2S prepared the required Asbestos Abatement and Demolition/Renovation Notification Form giving the property a clean bill of health from an asbestos stand point. The building had been vacant for a number of years, which bears its own set of health hazards. E2S identified bird feces as a health hazard for contractors during renovation and demolition activities. As absurd as it may sound, bird feces is no joking matter. Special precautions must be taken during cleanup activities due to the potential for a variety of diseases that clean-up personnel can be exposed to. It’s important that cleanup personnel do not have compromised immune systems and that they wear personal protective equipment (PPE) to avoid exposures. E2S provided cleanup recommendations that included protective measures for the construction and cleanup crew in order to move the project forward in safe and efficient manner.