Can you imagine inheriting land from someone you most likely never met? That’s exactly what happened to Brecknock Township a few years ago. The township’s officials were surprised when they received a call stating that they inherited 47-acres of wooded land including a mansion. The property in question was the Buxton House, which was previously owned and occupied by Phillip T. Buxton and his late wife. The Buxton’s lived in the house as they worked on it close to thirty years. It’s unknown why they never completed construction of the property, but the structure was deemed unsafe for occupancy upon inspection. The partially finished residence was officially bestowed to Brecknock Township in 2011. The only stipulation was that was that property was to be used as a park named after the Buxton’s.  The township plans to follow through on this request, and the first step will be to demolish the existing residence. Bringing the mansion up to code would have cost the Township hundreds of thousands of dollars. Ultimately, demolishing the structure was the most feasible option. 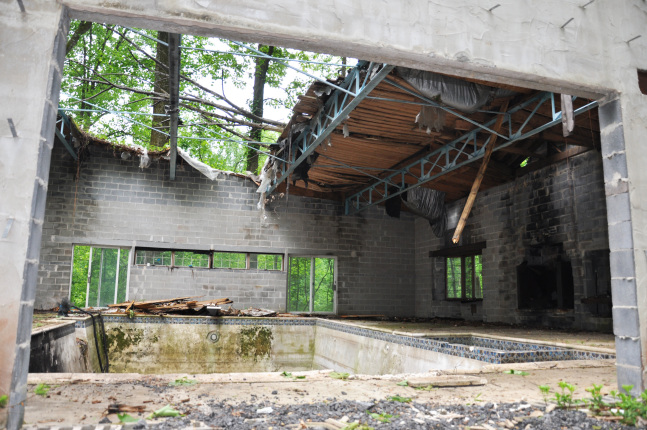 Prior to demolishing a building, it is required that an inspection be performed for asbestos-containing materials (ACM). All identified regulated ACM must be removed by a licensed contractor prior to demolition. For buildings constructed prior to or during the 1970s there is a higher risk of ACM materials being identified since asbestos was used extensively in insulation, surfacing and other constructions materials at this point in time. Element Environmental Solutions (E2S) performed the asbestos inspection of the 3,500 square foot structure built in the 1970s for Brecknock Township. Element also collected samples from any suspect ACM materials identified in the three-story structure.

The asbestos inspection included visual identification of suspect materials and subsequent sampling of those materials as required.  Suspect materials identified included roofing, flooring materials, drywall, ceiling tiles, plaster, fireplace brick, and weatherproofing.  E2S performed the inspection, sampling, and report preparation and submission in a timely manner, to meet the township’s schedule.  The result of this inspection and sampling did NOT identify any ACM associated with the residence, interior and exterior, and the Township was provided the report for documentation and given clearance for demolition of the property from an asbestos-containing materials regulatory standpoint.  The entire project, from the initial proposal submission, approval, inspection and sample analysis, through report submission was provided within a four week time frame.

This was an exciting project for E2S to take part in because of the value it will add to our community. Some of our employees are fortunate enough to drive by this property on the way home. We look forward to enjoying the park for years to come once the township has opened it to the public.